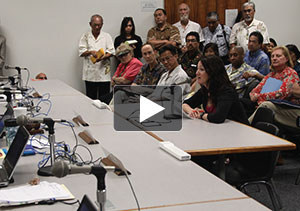 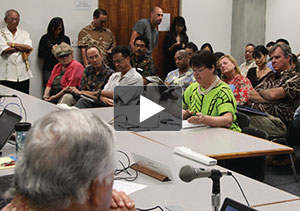 On Feb. 13, your fellow HGEA members and staff testified before the Senate Health Committee in opposition to S.B. 1306 (Relating to the Hawaii Health Systems Corporation), which would allow the regional systems of the Hawaii Health Systems Corporation and their health facilities to transition to non-public status. Thank you to the members who took the time to submit written testimonies and to those who were able to attend the hearing and testify in person.

In response to member testimony and staff lobbying, the Senate Health Committee made some significant changes to the bill to “encourage further discussion.” Amendments included adding a requirement that both the Senate and House vote to approve the transition of one or more regional systems of HHSC to non-public status. The committee also removed the section that would allow Banner Health to be exempt from Hawaii Revised Statutes chapters 76, 87A, 88 and 89. Chapter 89 is the collective bargaining law that provides for union representation. This was a significant accomplishment, but we must remain vigilant and keep the momentum going, as the bill is now being referred to the Senate Ways and Means Committee.

“Sending monies to the mainland is like sending prisoners here to the mainland,” added Uwekoolani. She’s also concerned about the reduction of services in areas that don’t generate money but where services are needed. (To view video of Uwekoolani’s testimony, click here.)

HGEA Field Services Officer Joan Takano also testified against the bill. (To view video of Takano’s testimony, click here.) Representatives from the Hawaii Division and Maui Division were also there to provide support in opposition of the bill.

In written testimony that was submitted on behalf of HGEA, Takano stated that the HHSC’s system of community hospitals must remain intact to preserve the safety net for the neighbor islands. “A fragmented health care system is a disservice to Hawaii’s people and threatens the long-term viability of the entire health care delivery system,” she said. (To read the full testimony, click here.)

Unit 3 member Arvid Youngquist was also at the hearing and testified in opposition to the bill.

HHSC and Banner Health executives testified in support of the bill. As reported in a previous eBulletin, Wesley Lo, regional CEO of Maui Memorial Medical Center, responded to HGEA’s letter requesting information about the effect Banner’s potential takeover would have on current employees. HGEA recently sent Mr. Lo another letter. Click here to view the letter.

Please continue to contact your legislators to let them know you strongly oppose the bills as legislation is moving quickly.

We will continue to update members on the status of these bills as more information becomes available.